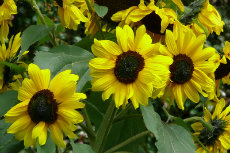 The Sunflower, Helianthus annuus, has been cultivated for at least 3,000 years by Indians of the Americas and the Chinese. The Incas called them “Chimalati”, sacred emblem of the sun god.

Their image was carved on temple walls and shaped into gold jewellery worn by the priests. Sun priests wore a crown of sunflowers and carried the blooms in many rituals and ceremonies.

Spanish explorers of the 16th Century stood in awe beneath fields of these sacred suns for they had never seen anything so grand. They took the seed back to Europe where it first became widely cultivated in Russia.

There are fuzzy headed doubles and darling dwarfs that thrive in containers. All parts of this sacred plant can be used. The seeds are a delicious, versatile food source that produces mineral-rich oil used in cooking, margarine and fine salad oils, a variety of skin-care products and as an excellent lamp oil.

Sprouted seeds are eaten in salads. Old seed cases produce paper and make rich garden mulch. Drinking an infusion of flowers has weak insecticidal properties against mosquitoes and was used to combat malaria. Petals produce a lovely dye and are dried for potpourri.

Unopened flower heads can be cooked and eaten like artichoke. The leaves are used as fodder and a substitute for tobacco. Stems produce a durable fibre often made Into rope and silk in China. The inner pith is in high demand by space laboratories as an ultra-light packing material.

Roasted roots are eaten outright or added to cakes and soups. Shredded plants used as fodder or mulch are an excellent source of potassium and nitrates and their ashes are rich in potash. In the Netherlands sunflowers are used to reclaim marshy lands.

In the Language of Flowers tall varieties often are used to represent “pride”. Dwarf varieties mean “adoration” and are given in connection with worship, religious occasions, graduations, sporting events and cultural triumphs.

Seed is planted out where the plants are to grow and can be planted now for a spectacular late autumn show. Double and dwarf varieties work best when planted this late. Choose a sheltered spot in strong sun with warmth, good air circulation and drainage.

Try growing in the glasshouse for Winter blooms. They are easily grown in containers and have the unusual ability to dwarf themselves to accommodate almost any size of pot!