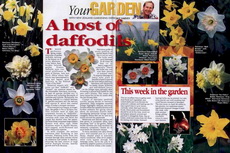 The following articles are a small part of the many published editorials on or about Dale Harvey, John Newton and the property affectionately nick named by the people of New Zealand, the "Quarter Acre" Paradise gardens.

Over the years both Dale Harvey and John Newton have been very honored by the on going response and support of the New Zealand media. They have always help us promote the environmental message we have tried to get out to the public of New Zealand and the world.

We believe that this message of saving our planet is the biggest problem our generation has encountered and globally through the efforts of the media the word is getting out there and making a difference.

These actions encouraged both Mr Harvey and Mr Newton to create a trust called, H.O.P.E. Trust, the Healing of Planet Earth.