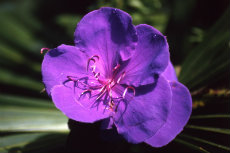 This boldly colourful evergreen shrub has earned the name Princess Flower and Glory Bush. Its botanical name is Tibouchina (tie-bow-sheena) and there are at least 200 species and nearly 350 subspecies of these fast-growing subtropical South American natives. Most are native to Brazilian rainforests and cool subtropical mountain

highlands. Today the orginally found species, Tibouchina semidecandra (or organensis) grandiflora, has been hybridized and at the same time naturalized around the subtropical world into a great variety of forms some of which have become 'weeds' in benevolent climates such as Hawaii and the Madeira region, where they reproduce and quickly spread from vegetative stems rather than seed. Thus this plant is easy to reproduce from stem cuttings.

Tibouchina tolerate cool temperate, warm and hot climates that always remain moist, humid and relatively frost-free. Mature plants can tolerate a few degrees of frost over short periods but freezing kills them. Tibouchina grows best in somewhat acid soils enriched with generous organic matter that remain moist but drain freely. They need full or partial sun and shelter from severe winds as branches are brittle. In hot climates they perform best with roots shaded and tops in the sunshine.

Tibouchina makes a bold and striking specimen plant, and is easily grown in a large container. In cold climates it can be grown to become a feature for the conservatory or large glasshouse where it could (optionally) also become an outdoor summer feature in a warm and sheltered area.

In the subtropics it is also a highly prized feature plant for tubs, specimen planting, bold accents, borders and anywhere a splash of bright color is desirable. A mature Tibouchina covered in vibrant satin-royal purple flowers makes a dramatic feature hedge or bold colour contrast when planted near Bougainvillea Scarlet Ohara or golden Cassia John Ball.

The most commonly cultivated species today is possibly Tibouchina macrantha, commonly known as the Lasiandra. This is a somewhat roundly open shrub to 3m/10ft with velvet green ovally pointed leaves that often turn yellow/orange/red before falling.

Large rich purple rather flat to slightly cup-shaped flowers are abundantly produced in loose clusters from autumn to spring and in the right location some flowering occurs all year.

Older leaves on both these species may turn vivid scarlet, orange or canary yellow with age or during drought. The large, showy blooms up to 10cm across in some hybrids are classically shades of rich purple,but there are now mauve, pink and white hybrids with flowers that smother the shrubs starting in summer or early autumn through winter and some bloom year-round.

Tibouchina semidecandra (Osbeckia) is more a sub/wild/species with loosely trailing evergreen branches and smaller leaves of a similar Tibouchina shape on a sprawling, open shrub that can be used as a dense shrubby groundcover or clipped into a hedge 1-2m/3-6ft. It can be allowed to cascade; espalier or be trained upward to 10-15ft(3-5m.), possibly to cover an arch or building or wall. Rich purple to blue/purple flowers are somewhat smaller and produced abundantly over the shrub throughout the cooler months and sometimes much of the year.

Tibouchina granulosa (the Princess Flower or Glory Bush) is a round to oval shaped taller shrub or small tree to 10m(30ft). Bark and foliage are similar to other large-flowering species. But Glory Bush features dramatic flower heads of somewhat smaller flowers packed into large open panicle spikes of many irridescent violet purple, deep mauve and pink almost star-like flowers that cover the shrub. The true princess is T. granulosa rosea displaying a starry garland of amethyst/mauve/pink to soft pinkish-white glowing flowers that crown the shrubs primarily through the cooler months.

All tibouchina are quite hardy and low maintenance shrubs when grown in the appropriate climate. To keep them dense, bushy and prolifically in flower, pinch or prune tips frequently, especially immediately after a flush of flowers. Once a shrub becomes too large for its location, it can be pruned back rather severely, often even down to a stump, and soon will sprout new flowering stems in abundance.In subtropical frost-free moist climates plant them anytime, but planting in spring or autumn is best. In colder climates, spring is preferred when planting into tubs for summer display followed by wintering-over in the glasshouse.

Tibouchina is best feed with a general balanced plant food or compost/manure mulch in spring and autumn or early winter. Once buds form, they respond quickly to liquid or foliar feeding. For best flowering be sure Tibouchina always remains moist, especially during dry weather. Cuttings can be taken almost any time, but when taken in autumn and early winter they will be ready to plant out in spring. These small plants can also be used as an unusual bedding plant in the garden next summer.

"I think it pisses God off when you walk by the color purple in a field and don't notice it."
from the movie "The Color Purple"