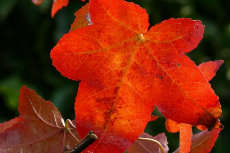 Autumn can be a glorious time of the year for colour in the garden. Shrubs like Cassia, Lasiandra, Vireya, Osmanthus, early Azalea & Camellias. Also included are late Roses, Abutilon, Loquat, Polygala, Lantana, Plumbago and much more are in full flower now.

And these can be under-planted with flowering groundcovers like Polygonium (Patchwork) and Plectranthus. There's still a lot of colour remaining in the flowering borders through the colour of bulbs and tubers like Colchicum (the autumn crocus), Anemone, Cyclamen, and the first early Narcissus, as well as Nerines.

Nerines, a spidery flowering lily flowering atop long stems are at their peak now in bright pinks, reds, oranges and white. Dahlias really enjoy cooler, moist conditions for best flowering as this preserves the freshness of the blooms.

So if the plants were cut back hard in mid summer after the first flowering had nearly finished they will be at their peak now for a truly magnificent autumn show.

Other tubers like Canna should be giving a last bust of warm colour to remind us of the warm days of summer. And the first gothic white Arum lilies are reminding us that winter days are near at hand. Perennials like Chrysanthemums are now ablaze in just about every shade other than blue.

These contrast well with the blues, purples, pinks and whites of the last Michaelmus Daisies and the blazing yellows and golds of the Heleniums, or perennial sunflowers.

The best known of these is Autumn Glory which is literally smothered at this time of year with single or double daisy blooms in richest gold.