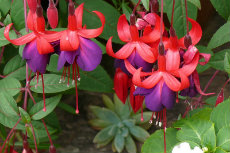 The Fuchsia is a classic garden plant steeped in the romance of the cottage garden style. Although the name is commonly pronounced "few-sha" it's correct botanical pronunciation is "fuke'-zi-a" and it also goes by the common names of Lady's-Eardrops, Fairy Caps, and Chinese Lantern.

The Fuchsia was named after a German botanist, author and physician of the 16 century, Leonhard Fuchs who was largely responsible for the shrub being included in the garden world.

Most Fuchsias are native to Central and South America while a few more unusual varieties are natives of New Zealand.

Today there exist over 100 species and several thousand named cultivars. Most are shrubs or small trees. Species magellanica with it's 1-2 inch small red and purple/blue flowers can attain 6.5m.

While the N.Z. species procumbens is a prostrate groundcover with small orange purple flowers and oval leaves that hardy resembles what is commonly thought of as a Fuchsia. Most of what is commonly known as Fuchsia in the garden world comes from species hybrida.

These are a more modern cross between magellanica and a Mexican species. Fuchsia prefer cool conditions, especially in summer, and need good drainage but an ample and constant supply of moisture throughout the year.

They grow in a variety of soils but prefer ones that are light, loose, and peaty. They respond well to well rotted manures and appreciate frequent light applications of a well balanced commercial plant food mixed with blood and bone and compost spread around the plant as a mulch.

For extra big, bright, showy blooms feed at least every two weeks with a liquid plant food which can be watered directly over the plant. Because they demand a continual supply of water, especially over the summer growing/blooming season, it is usually advisable to mulch around the shrubs out to the dripline.

Fuchsia stems are quite brittle and snap easily in strong winds or if knocked against repeatedly as might happen next to a walkway. Provide proper staking which is very important for standards and taller varieties and avoid very windy sites.

Fuchsia has the distinct advantage that it prefers mild sun or dappled shade. They adore morning sun and will thrive in later afternoon sun if not too scorching. They are also superior shrubs in light shade or dappled sun as found in a woodland where many other flowering shrubs find conditions difficult.

Avoid hot spots in full sun as the foliage will scorch and plants will dry out, dropping buds.Fuchsias are excellent subjects for hanging baskets, pots and tubs, as standards and trailed as espaliers or cascades over walls and fences.To keep growth tight and bushy, pinch back the growing tips frequently and cut back canes by at least 1/2 their length after flowering.

Aphids, whitefly, caterpillar, rust, blackspot and mildew are their major pests and can easily be controlled with a regular organic/inorganic spraying program similar to roses. While the attractive berries are best removed, they make an interesting jam or jelly!