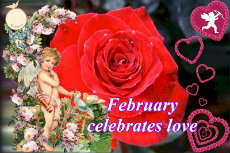 Valentine's Day is the day for lovers. Since love is eternal, it is not surprising that this special day has a history that goes all the way back to ancient Greece and Rome. February 14th was set aside in both cultures as a special day for their respective goddesses.

Hera and Juno, who represented women and marriage. This was followed on Feb. 15th by the Roman festival of Lupercalia.

The festival was held to ensure protection from wolves. During the celebrations, the young men would strike people with strips of animal hide. Women were the main target.

They took the blows quite willingly because it was commonly thought that the whipping made them more fertile. At the same time in ancient Britain, there was the common belief that birds choose their mates on February 14th.

Actually, the calendar they used then was different before 1582 so February 14th came on what 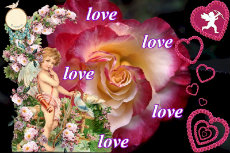 today is February 24th. The first signs of spring would most definitely be in the air at that time along with the returning birds.

When the Romans invaded England in 43 A, D. they brought their festivals with them. It wasn't long before the festival of Lupercalia became tied with the mating birds on Feb. 14th because of the similar date and connection with fertility.

Later in the 1300's English poet Geoffrey Chaucer cemented this union when he wrote in The Parliament of Fowls, "For it was on St. Valentine’s Day, when every fowl cometh there to choose his mate", Shakespeare made a similar reference in ‘A Midsummer Night's Dream’.

The ‘true’ Saint Valentine’s historical association with Valentines’ Day is somewhat obscure. The ancient Romans seemed to have quite a dark history when it came to killing the kind and loving. There are at least 14 martyred Saints all associated with St. Valentine. The name itself is Latin for ‘Valens’, a very popular name during that Age, which meant ‘worthy, strong and powerful’. But obviously not enough so to escape Roman persecution! 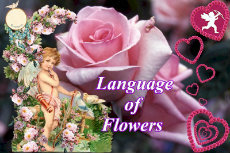 St. Valentine's himself, whoever he was, didn't have much to celebrate. The most accepted vague historical accounts and legends state that Valentinus (Valentine) was a Roman Priest, possibly the Bishop of Interamna (modern day Terni, a town north of Rome), in the mid 200s AD during the reign of Roman Emperor Claudius II, Claudius Gothicus, the Goth.

Claudius forbad young men to marry as he thought that single men made better fighters and soldiers. The Christian Priest Valentine disobeyed the emperor's orders and secretly married young couples. Mostly Christian couples. It was also against the law to help Christians in any way. When it was discovered what Priest Valentine was doing, he was arrested and imprisoned on the charge of not worshipping the Roman gods as well as aiding Christians. Priest Valentine was endeared to many who he had married and protected, and especially to their children. Legend says that they so missed him that they tossed loving and supportive notes through the bars of his cell window. 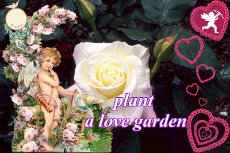 At his trial Claudius apparently liked Valentine at first. But he would not renounce Christianity and God but actually attempted to covert Claudius to a Christian way of thinking. Arrogant Claudius then sentenced Valentine to death. Thus in later legends, the name Valentine came to become a symbol of ‘valour’.

It is said he was beaten, clubbed and stoned and when that didn’t kill him, then beheaded on Feb. 14th, 269 A.D. Some accounts record his execution and burial on the same date some years later perhaps as late as 280 AD. As a symbol of his martyrdom, and defiance against the rogue Claudius, people began to exchange messages of affection to one another each year on the date of his execution.

In 496 A. D. Pope Gelasius named Feb.14th as St. Valentine's Day. This not only honoured the martyred St. Valentine but also gave the early Christian Church the opportunity to convert a pagan fertility festival into a Christian holiday. Later in the Middle Ages several basilica and churches were built in honour of St. Valentine. 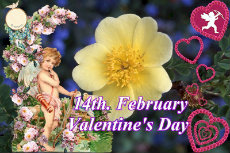 Norman French had a word "galantine" which sounds very much like Valentine and means "gallant" or “lover". Over time the two became one and people came to associate St. Valentine as the Patron Saint of Lovers and Greetings.

Some scholars maintain that while Saint Valentine may have been a real individual, he was never associated as the Patron Saint of Lovers that he has become today. They maintain that this is no more than sentimental distortion of historical fact promoted especially by the Church and 18th Century Antiquarians with the intent of embellishing historical truth for romantic glorification of the Saints.

Not that many cared. They wanted a religious Hero for Lovers. History is fairly clear that many people in England began celebrating Valentine’s Day with verse as early as the 1400’s. Ironically, this association with the ‘original’ St. Valentine once again blurred the lines of historical truth. For this tradition of celebrating Valentine’s day with verse can be traced to a Frenchman, Charles, Duke of Orleans, 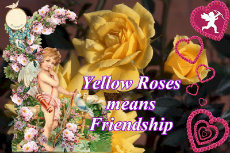 who was captured by the English during the Battle of Agincourt in 1415.

He was taken to England for imprisonment. On Valentine’s Day he wrote a rhyming love letter to his wife from his cell in the Tower of London. This touching sentiment created a tradition that survives to this day.

By the 1700’s romantic messages gradually replaced the giving of gifts. It was common for shops to sell handbooks called Valentine Writers. These books included verses which could be copied as well as helpful suggestions on the writing of Valentine verses.

The first commercial cards were made in the early 1800’s. They were usually blank inside so the sender could write an appropriate message. Valentine’s cards became a major symbol of endearment through the artistry of Kate Greenaway in the later 1800’s. 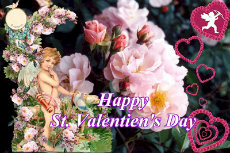 Her cards featured adorable, happy children and lovely gardens in classic Victorian style. The Victorians associated flowers with love and happiness. The colour red was a symbol of passion and the heart was deep emotion, love and endearment.

Once the Victorians combined the symbolism, it wasn’t long until Valentines Day became the festival of love, celebrated with the giving of charming cards with endearing messages, lacy red hearts and beautiful flowers that we still celebrate today.

Long live the festival of love!