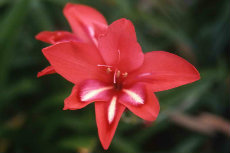 Almost all species of Gladioli are very easy to grow. Dwarf Nanus varieties and many other ‘wild’ species are usually best planted in autumn for late winter through late spring blooms. In mild climates the bulbs can be left undisturbed where they often multiply to make impressive clumps.

In climates experiencing prolonged severe freezing its best to spring plant and lift in autumn and place in sheltered winter storage as for larger hybrid gladioli.The remaining groups including all Large-Flowered Hybrid Gladioli are best planted once soil is warming and danger of severe frost has past; so dependent on local climate, from late winter onward throughout the spring into early summer. By planting corms roughly every two weeks a succession of flowers can be produced over many months. Gladioli are an excellent crop for commercial cut flower cultivation.

Choose a warm, sunny site sheltered from winds. Gladioli prefer full sun but will produce good spikes in partial shade providing there is strong sun for at least several hours each day. While the corms will grow in many soils they prefer ones that are deeply rich, and a loose loam that drains well but always holds a bit of moisture. Avoid freshly manured soil and all acid soils of 6pH or lower. Soil pH of 6.5-7.5 is ideal. Plant the corms with the small green shoot facing upward 125m-150mm (5-6in) deep and 6in apart. Plant a little deeper in sandy soils. In heavy soil place a handful of sand beneath the corm to help control possible rotting or plant in raised beds or elect instead to plant in large containers. Gladioli corms will rot if waterlogged, but require regular rainfall or watering during their growing cycle.

Because gladioli blooms are very top heavy, they usually need staking which is often best done when the bulbs are planted. While they are classically planted in rows 60cm apart they can be planted in clumps, blocks or large beds which can make the supportive staking easier. For giant show blooms give more spacing between each corm combined with regular watering and feeding.As a preventative measure, some gardeners dip or soak their corms in a full spectrum fungicide/insecticide before planting to kill any eggs of thrip, mite or aphid and for fungus control. At the early stages of growth, water gladioli sparingly and only if conditions become dry. It is better to cultivate the soil around them rather than to water. Overwatering during cool weather can result in chill and corm rot.

At the third leaf stage, start to spray for thrip which, if unchecked will turn the blooms into dried knots. In wet climates thrip is not a problem, but as soon as weather warms and dries out, thrip can quickly multiply and will soon ruin the blooms. Increase the watering by leaf four and feed with a dry complete plant food or foliar spray. A balanced food for gladioli would consist of three parts blood and bone, 4 parts superphosphate and two parts sulphate of potash. Or substitute any commercial plant food in the general ratio of 3-4-2 or 5-10-5. Scratch this into the soil being careful not to let the fertilser drift up against the shoot or corm which could result in chemical burning. Then water this in thoroughly. Alternatively foliar feed at least every two weeks. For biggest show blooms also feed with liquid manure at the first signs of a flowering spike and continue until the first colour appears.

Flowers appear 90 to 110 days from planting. Flowering time is somewhat contingent on variety but more on air and soil temperature plus strength of sunlight. When planting for a succession of blooms wait until the first planting has at least one or two leaves strongly growing before planting the next round of corms. And remember that corms planted later once weather is warm and settled have a tendency to catch up with ones planted earlier when conditions were cooler. Cutting gladioli flowers actually helps add strength to the developing corm which will ultimately produce next years’ flower. Flowers are best cut in the cool of the morning after watering the evening before or later in the afternoon or evening after the heat is off the blooms.

For show or exhibition blooms, cut stems on a slant when the first bloom is just opening and plunge into deep cool water as soon as possible. Re-cut the stem every second day to promote additional water intake up the stem that will make all the blooms open right up to the top. Even where gladioli are left to flower naturally in a garden display, their advanced flower spikes can be cut with the spent flowers and seed pods removed and the remaining buds on the stem will usually open to nearly the last bud. When cutting gladioli refrain from removing the foliage with the flower stem as this will damage the development of next year's corm.

Those blooms left in the garden should have their faded blooms removed before they can go to seed (unless the bloom is being raised for its hybrid seed). Let the foliage ripen for up to 6 weeks or until it begins to turn yellow. Then it is time to dig the corms. Either cut off the yellow foliage first or dig with foliage intact. Once the foliage easily pulls away from the corms, check and remove any badly damaged, diseased, rotted or suspicious unhealthy ones. Then clean and wash the corms. Wherever disease or insect pests have been a problem, the corms can be soaked for an hour or so in an appropriate fungicide/insecticide. Then let the corms air dry as quickly as possible before collecting for winter storage.

Store only the best corms in mesh/paper bags or best laid side-by-side shoot side upward in boxes stored in a dry, dark, airy cool but frost-free shed ready for replanting next year.