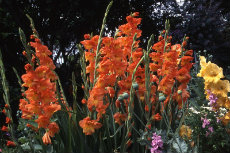 Gladioli are the birth flower of August in the Northern Hemisphere floral traditions, and have been a highly treasured flower for many centuries. They are members of the Iris Family. Classed as perennials but grown from corms. In various cultures gladioli have also been called Corn Flag, Corn Iris & Sword Lily.

Legends about the gladioli trace back as far as ancient Greece, when the flower was known as Xiphium, from ‘xiphos’ meaning sword Even today’s’ name, Gladioli, derives from the old Latin word "gladius" which was the Roman word for the sword used by a gladiator.

Gladiolus being the diminutive: “little sword’. Indeed the leaves and even the flower spikes do resemble a gladiators weapon. Perhaps the gladioli’s association with gladiators has influenced its meaning in the Language of Flowers where gladioli represent: strength of character, moral integrity, and love at first sight. There are at least 1562 species and subspecies of gladioli mostly natives of South Africa and the remainder from the Mediterranean and Middle East. These include many delicate small, often butterfly-shaped blooms on thin spikes gracefully held above grassy foliage.

While the most popular larger-flowered hybrid types can reach 6 ft (2 m) with florets up to 8” (10cm) across! Today’s gladioli are believed to be the result of cross breeds between five native species, g. augustus, g. cardinalis, g oppositiflorus, g. carneus, and g. tristus. Breeding started in the 1820’s resulting in many exciting hybrids. Around 1837 newly introduced species g. dalenii added green, brown and purple shades to the mix resulting in the highly prolific Belgian hybrid species g. gandavensis. In 1870 the French introduced newly discovered species g. papilio to the mix which added deep purple blotches, while German breeders continued crossing g. gandavensis hybrids with the other African and Middle Eastern species producing over 2000 named varieties by 1880.

Many of these fine hybrids were sold to nurseries in the USA from around 1891 where they became an instant sensation. Continuous breeding with these forerunning hybrids produced our modern-day garden and florist gladioli. Today there are many thousands of named cultivar hybrids in every shade of the rainbow. These gladioli are respected as one of the world's best cut flowers. Today’s garden variety gladioli are divided into several main groups: Nanus Gladioli are dwarf species quite hardy and early flowering, growing no taller than 60cm (24 in.) with grassy foliage and branching stems supporting delicate blooms of every possible colour and a variety of often starry or orchid-like flowers. Many of these are superior for floristry and in containers.

The Primulinus Gladioli group has slightly larger flowers and was introduced into cultivation around 1900. Discovered on the Zambezi River, these wild yellow-shaded gladioli were called the "maids of the mist" because their Renoir pastel blooms have a hooded upper petal to protect them from the misty falls where they were found. Their modern hybrids feature somewhat narrow flower spikes in a

variety of shadings all carrying this unique hooded petal characteristic.Miniature Gladioli first introduced in 1950 are distinctive in that they closely resembled the larger hybrid forms in habit of growth, flowering and colour range, only in miniature. They are excellent for floristry and containers.

The Butterfly Gladioli group introduced around 1951 feature spikes of sometimes smaller flowers with crossed or folded often star-like or ruffled petals with trailing sections that resemble a butterfly in flight. Many are somewhat miniature or willowy in habit and their flowers often have distinctive contrasting blotches on the throat. These hardy gladioli make striking cut flowers. Large-Flowered Hybrid Gladioli have impressive flowers often 250mm (5 in.) across with 13 or more blooms per spike up to 2m (6 ft tall) in every conceivable colour and combination of colours. The formal types have opposite facing blooms with overlapping petals that hide the stem. Informal varieties have staggered blooms.