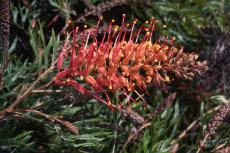 Another fiery flower of the cooler seasons are Grevilleas. These Australian members of the Protea Family have ancient fossil relatives in South America and South Africa. These fossil relics were used by scientists to support their theory of continental drift.

As Botanists began exploring the Globe and recording what they found, they began to notice unusual similarities between plant species in very remote regions. The Grevillia was such a unique genus that it stood out as a classic example of this observation. By comparing their findings, Botanists discovered that very similar Grevillea species were supposedly 'native' of three separate continents. How could this happen when they were all so far apart?

There was a rush to explain why. In the end this resulted in Botanists, Geologists and Palaeontologists combining their knowledge about plant species, geological history and strata, plus fossil evidence. Their conclusion created a most convincing theory that at one time many of the continents were joined into what soon would be called the massive continent of Gondwana.

Through geological time Gondwana later 'drifted' over the Earth's molten mantle and collided with several other land masses forming one giant supercontinent known as Pangaea. This happened during a time when many new plant Families and Genera were first developing. Later during the Jurassic Period, famous for the ruling Dinosaurs, Pangaea was ripped apart by massive tectonic forces. These not only led to Mass Extinction events, but also propelled the continents apart.

Plant species growing in regions near these tectonic rifts were then divided to remain on that particular piece of continental ground. There they continued to develop as separate but highly similar species, now thousands of miles apart on different continents. Over time, each separated genera evolved to adapt to their changing continental climates but retained very similar characteristics by which they could be easily identified.

To further support this theory of Continental Drift, Geologists then studied the soils and rock strata in which these related species grew. To their great delight and surprise all the geological strata matched perfectly. This more or less 'proved' that at one time, these separate continents had once been joined together. And this great revelation occurred thanks to the cooperative Kingdom of Plants!

Today 250 species and hundreds of Grevillea hybrid cultivars are grown for their attractive, evergreen foliage and exotic flowers, greatly admired by Gardners as well as birds for food and nesting. They prefer a sunny spot, dryish, gravelly, well drained soils rich in leaf mould and slight acid. Their durable and often leathery foliage can be needle-like and sprickly or smooth and lobed and toothed. These evergreen and woody plants can assume the habit of low and spreading groundcovers, shrubs and even impressive trees. All are hardy to drought and heat but few can tolerate much freezing. Although occasional frosts are no problem, especially when their surrounding soil remians rather dry.

Avoid wet, humid sites. Feed only lightly in Spring and Autumn or as a flush of new buds develop. Avoid phosphates or over-feeding with any type of chemical commercial plant foods. Try mature compost, blood and bone and aged manures or leaf mould as a mulch.

Tip-prune from an early age to maintain shape and continue this lightly after flowering. Don’t prune deeply into old wood. Prune back no further than the last mature leaf as regrowth seldom occurs on leafless older woody canes. It is best to remove these to near the ground. This will often result in regrowth of an entirely new shoot.

In mild climates Grevilleas are easily planted from containers from as soon as cooler, damper weather returns in the Autumn, through Winter into Spring. In colder marginal climates, Spring planting is preferred. They usually establish quite quickly and need little care or maintenance. But established Grevilleas are difficult to successsfully shift and  transplant. They are easily started from layering of branches or cuttings started in a propagation box especially during the warmer months. Sometimes also in a temperate cold frame through the cooler months as well.

For those living in marginal climate zones with winter freezing, Most smaller Grevilleas species can be successfully grown in large containers. They resent extremes of dry and wet, cold and hot, which often happens in smaller containers. But in the open landscape within their native growing region, these are hardy almost anywhere.