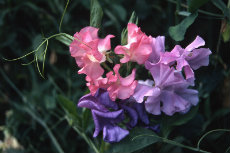 Royal Flowers Lathyrus odoratus, the common Sweet Pea was first introduced from Sicily into the gardening fraternity of England in 1700.

There it languished for nearly 150 years until Henry Eckford created 200 new varieties that soon made common Lathyrus the most sought after climbing annual in Europe.

Since then over 3000 varieties have been produced, some very fine strains have been hybridized in  New Zealand.

The 300 varieties currently in cultivation, have brought pleasure to millions and made millions for Commercial Growers especially around Los Angeles where 2/3 of all the world's Sweet Pea seed is grown.

Today they are among the most highly developed annuals being prized by Gardeners, Commercial Growers and Florists as the " Queen of Annuals". These cool weather plants quickly collapse in drying heat. Their native origins in Sicily gives away what they most enjoy: airy, cool, frost-free, sunny Autumn, Winter and Spring conditions that predominantly remain dry.

Sweet Peas can be sown throughout the Autumn in milder climates. This produces the earliest flowering and strongest plants. In colder districts of New Zealand, the "early" varieties can be planted in the glasshouse or as soon as soil can be worked in Late Winter or Early Spring. Early planting almost always produces the best results but in milder areas where summery heat is not a problem, progressive sowings will provide flowers for nearly 8 months of the year.

They need a position in full sunshine and sheltered from wind but with good air circulation to avoid mildew and fungal infections. They are best grown on a strong trellis or support. Some Gardeners allow them to ramble through a cottage garden bed or over shrubbery. Prior to planting create a trench where the Sweet Pea seed or seedlings will grow. Into the bottom of the trench, mix into the soil well-aged friable compost and wood ashes or another form of potash plus lime and a general plant food. Let this site stand unplanted for at least a week. If sowing seed, soak it for an hour prior to planting. Then sow the seed or carefully transplant the seedlings into the bottom of the trench. Sweet Peas are easily set back permanently if they experience any root damage at the time of transplanting. Cover the trench on cold nights to protect the tender plants from freezing. This can also save the plants if a protracted period of cold rain could potentially ruining the emerging seedlings. Guard against predation from hungry birds, slugs and snails.

As the young vines emerge, slowly back-fill the trench so that it eventually is almost flush with the surrounding soil. The vining tendrils are quite fine so need something thin to cling too such as twine or thin brush, chicken wire or thin mesh. Wire can work but may over heat later in the season resulting in vine damage in climates with hot sunshine. For more abundant flowering and considerably bushier plants, pinch out the central leader at about the 6th leaf stage. This will encourage side shoots to form resulting in many more flowers.

Sweet Peas benefit from generous watering once vines become established and the weather becomes drier and warmer. But it is essential that water drains away rapidly. Sweet Peas will not tolerate wet feet for very long. They are best watered at their base rather than over the foliage. They can be grown successfully in large containers or tubs and do well in raised or sloping beds. Mulch can be heaped near the vines to help retain moisture and keep the soil cool and productive but avoid direct contact with the vines.

Sweet Peas can be quite temperamental about feeding. Do not use high nitrogen foods as these can cause burning. Being a legume, Sweet Peas create their own nitrogen on special root nodes so any extra nitrogen can toxify the plants resulting in their death. Foliar feeding with a plant food high in potash and trace elements is beneficial as are light doses of Epsom salts. Keep any granular fertilizer well away from the growing stems. Liquid feeding at the vine base is effective provided the vines have been prewatered before liquid feeding. Foliar feeding is quite effective and best done late morning until early afternoon so that the vines can thoroughly dry out before nightfall.

Remove faded blooms and all seed to keep plants flowering. Lime sulphur or copper sprays will stop most fungal attacks. As soon as weather begins to warm and become more humid, watch carefully for signs of mildew and rust. The wise gardener usually provides a preventative spray once the vines become well established and again at the advent of warmer weather. This stops any problems before they can ever begin.

Once the vines have finished, they can be cut into small pieces and dug back into the soil as green manure or removed to the compost pile. Some Gardeners use them as a mulch around nitrogen-loving, leafy Summer vegetable crops like Broccoli or Lettuce . Much like pea straw, dried and decaying Sweet Pea foliage is a rich source of nutrients for the garden.