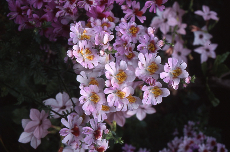 Poor Man's Orchid, Schizanthus, is an annual or biennial plant that comes in at least 11 different species and many more varieties. They are part of the vast nightshade family and are rather closely related to Petunias.These are ancient plants with a botanical history that dates back at least 50 million years to the Cretaeous Period. They appear to have originated in the steamy tropical climates of what is today known as South America mostly around Argentina and Chile. As the climate changed around 5 million years so did the Schizanthus. These clever plants are open pollinated meaning that a variety of insects such as bumblebees, honey bees, flies, moths,  hornets and wasps even small birds like the Hummingbird or whatever else was around could pollinate their flowers. They also bloomed in such profusion that almost certainly a few would be pollinated and set seed for the next generation. This allowed them to diverge making them adaptable to a variety of climatic situations.

The one species most cherished and widely grown that will be discussed here is Schizanthus x wisetonensis. These plants feature delicated, deeply cut, ferny foliage that is soft green and sometimes a bit hairy arranged rather symmetrically around a central stem that is sometimes branching. The leaves themselves would make a beautiful ornamental plant. But they are topped by a profusion of delicated fringed or winged flowers in a multitude of color combinations mostly in shades of pink, purple, salmon, scarlet, white and paste bicolors. Many have beautiful blotched, spotted and striped markings each marked in bright gold that nearly  cover the tops of their branching stems. The overall effect is almost like a Christmas tree smothered in Angel or Butterfly flowers. This gives rise to their common name of 'Angel Wings' or 'Butterfly Flower'.

There are many named varieties like the 'Disco' and 'Treasure Trove' series. Some are compact and quite dwarf to 30cm/1 ft. while others can extend to over 60cm/2ft.  Because stems are often brittle or and bend and twist, the dwarf forms are the most often cultivated. They make a lovely plant grown in containers in the conservatory or shade house or as a bedding plant in the cooler and partly shaded garden . They are an invaluable addition to the shady garden. But be aware that slugs and snails enjoy them, too!

The modern hybrids don't like tropical heat. But in cool climates they make wonderful  Summer and Autumn bedding plants. While in milder and tropical regions they are best grown in Winter, Spring, and late Autumn. In cooler regions of New Zealand late Spring and early Summer are excellent times to set these plants out in a semi-shaded location sheltered from strong winds and pelting rain. They can grow in stronger sunshine provided there is some shading during the heat of the day. As well as a bedding plant, they are often grown as a single container plant or as a dramatic feature in a large planter trough or tub.

In tropical and warm climates, mature Schizanthus plants often finish flowering as warm Summer weather arrives. That is the time to gather seed heads. Dry them until the are brittle. Shake or thrash out their seed that is then stored in a container sealed against humidity for later sowing in late Summer and Autumn. In cooler climates seed can be sown from Spring onward into early Summer for a Summer and Autumn display or advanced seedlings planted once weather truly settles and warms up for a faster display. The seed can be sown almost any time in pots or trays within the glasshouse or a similar protected environment. Sprinkle the seed over a fine, sandy potting mix and lightly smooth it in. Seed should barely be covered with a fine layer of growing medium. Schizanthus do best in a sandy loam with some well rotted manure or compost added. Soil must drain well.

Keep the soil evenly moist over the two or three weeks it will take while the seed germinates. Some Growers find that they have better success if the seed is kept covered and dark until the first seeds germinate. Once they do, move them into part sun or light shade. Shelter them from cold drafts and strong winds. They transplant easily once they are about 2 inches high.  But being delicate, they collapse easily if not kept moist. Once established keep them lightly moist and never let soil completely dry out.

Schizanthus are excellent container plants for the cool glasshouse or sunroom, especially over the wintry months. They are also a beautiful and dramatic bedding plant for light shade or partly shaded gardens in almost all climatic zones and open sunny beds in cooler climate zones during the warmer months,

When grown as container plants, transplant the seedlings into small pots first. Once their roots begin to appear through the drainage holes then repot into a larger pot. They can be easily repotted with care several times. This allows the plants to always remain root bound and well drained as they develop. Liquid feed regularly to get the maximum flowering impact. Pinching out the growing tip early in their growth followed by frequent pinching back later will make a bushier plant that can produce hundreds of blooms over many months. Or alternatively, stake them and allow these beautiful 'Angels' to rise into their true glory.