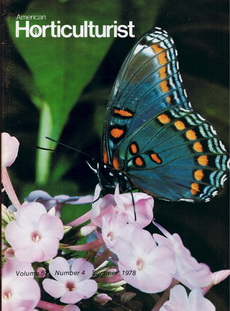 The following is the text of an article which appeared in American Horticulturist magazine Summer 1978. It summarizes the efforts of a unique series of botanical/garden projects which were developed in the American Midwest through the mid to late 1970's.

The initial projects were a collaborative effort between the local City of Cincinnati Government, the Police, The City Artists Program and the City of Cincinnati Park Board. Their purpose was to find unique solutions to reduce crime plus related urban problems: alienation, gangs, graffiti, isolation, lack of community unity, pollution, etc. The idea was to develop a much stronger community base within the urban environment which could adequately and successfully address these problems.

The projects were called Flower Power because we used the power of flowers to unite otherwise highly diverse groups and individuals into a common purpose. By working together these individuals created wonderful gardens that beautified their local communities as well as their private homes. These were often built on polluted 'waste' urban land which transformed these locations into places of beauty and bountiful harvest. While working together, they made many new friends which created much stronger community bonds and reduced their sense of isolation.

Their involvement in the local community produced a sense of ownership which greatly reduced crime, gang violence and graffiti. Many of the projects that followed raised both flowers and food crops. Some created wildflower and wildlife sanctuaries. Others actually 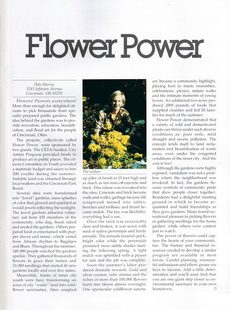 transformed their efforts into small businesses selling both flowers and vegetables plus gardening services.

The overwhelming success of these projects soon created an easily followed model which resulted in an estimated 100,000 community garden projects developing over the next decade in the United States and Canada. Similar projects are continuing around the world today.

The text of the article follows:

Flowers! Flowers everywhere! More than enough for delighted cit­izens to pick thousands from spe­cially-prepared public gardens. The idea behind the gardens was to pro­vide recreation, education, beautifi­cation, and floral art for the people of Cincinnati, Ohio.

The projects, collectively called Flower Power, were sponsored by two grants. The CETA-funded, City Artists Program provided funds to produce art in public places. The cit­izens Committee on Youth provided a materials budget and salary to hire 200 youths during the summer. Suitable land was obtained through local realtors and the Cincinnati Park Board.

Several sites were transformed into “Jewel” gardens, mass splashes of color that glowed and sparkled as would jewels reflecting the sunlight. The Jewel gardens attracted volun­tary aid from 155 members of the community, who dug, hoed, raked and seeded the gardens. Others pre­pared food or entertained with pup­pet shows and 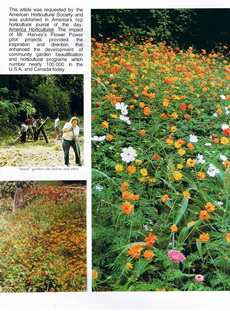 music, which varied from African rhythm to Bagpipes and Blues. Throughout the summer, 149,000 people watched the gardens sparkle. They gathered thousands of flowers to grace their homes and 10,000 seedlings that started 41 new gardens locally and over five states.

Meanwhile, teams of inner city youth were busy transforming six acres of city “waste” land into wild­flower sanctuaries. Sites coughed up piles of brush to 15 feet high and as much as ten tons of concrete and brick. This refuse was reworked into the sites. Concrete and brick became walls and walks; garbage became fill; scrap wood turned into tables, benches and trellises; and brush be­came mulch. The key was flexibility: everything had a use.

Once the land was reasonably clear and broken, it was sown with seed of native perennials and hardy annuals. The annuals insured quick, bright color while the perennials promised more subtle shades start­ing the following spring. A light mulch was sprinkled with a prayer for rain and the job was complete.

Soon the summer’s labor pro­duced dramatic rewards. Gold and silver cosmos, ruby zinnias and the riches of more than 100,000 flowers burst into bloom almost overnight. One spectacular wildflower sanctu­ary became a community highlight, playing host to music ensembles, celebrations, picnics, nature walks and the intimate moments of young lovers. An additional two acres pro­duced 2000 pounds of foods that supplied charities and fed 30 fami­lies for much of the summer. 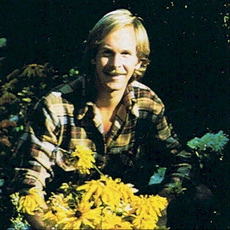 Flower Power demonstrated that a variety of wild and domesticated plants can thrive under such diverse conditions as: poor soils, mild drought and severe pollution. The concept lends itself to land recla­mation and beautification of waste areas, even under the congested conditions of the inner city. And the cost is low!

Although the gardens were highly exposed, vandalism was not a prob­lem where the neighborhood was involved. In fact, the gardens be­came symbols of community pride that drew people closer together. Residents had a delightful meeting ground in which to become ac­quainted and build friendships as they grew gardens. Many found rec­reational pleasure in picking flowers or gathering seedlings for the home garden, while others were content just to watch.

The power of flowers could cap­ture the hearts of your community, too. The human and financial re­sources needed to develop a similar program are available in most towns. Careful planning, resource­ful enthusiasm and elbow grease are keys to success. Add a little deter­mination and you’ll soon find that you are one giant step closer to en­vironmental sanctuary in your own hometown.